This week, I feel like the details of this project are starting to get away from me. I’m very particular about things, so it is frustrating to see errors and have to deal with them (or learn to accept them).

I’ve looked at many houses over the years, and know a good renovation from a sloppy one. Since starting the project, I’ve been determined to do everything I can to make sure this is a good one. That means all the details must be handled just right.

The water service upgrade required by the village, and delayed from last year, has been completed (aside from repairing the landscaping and patching the road). 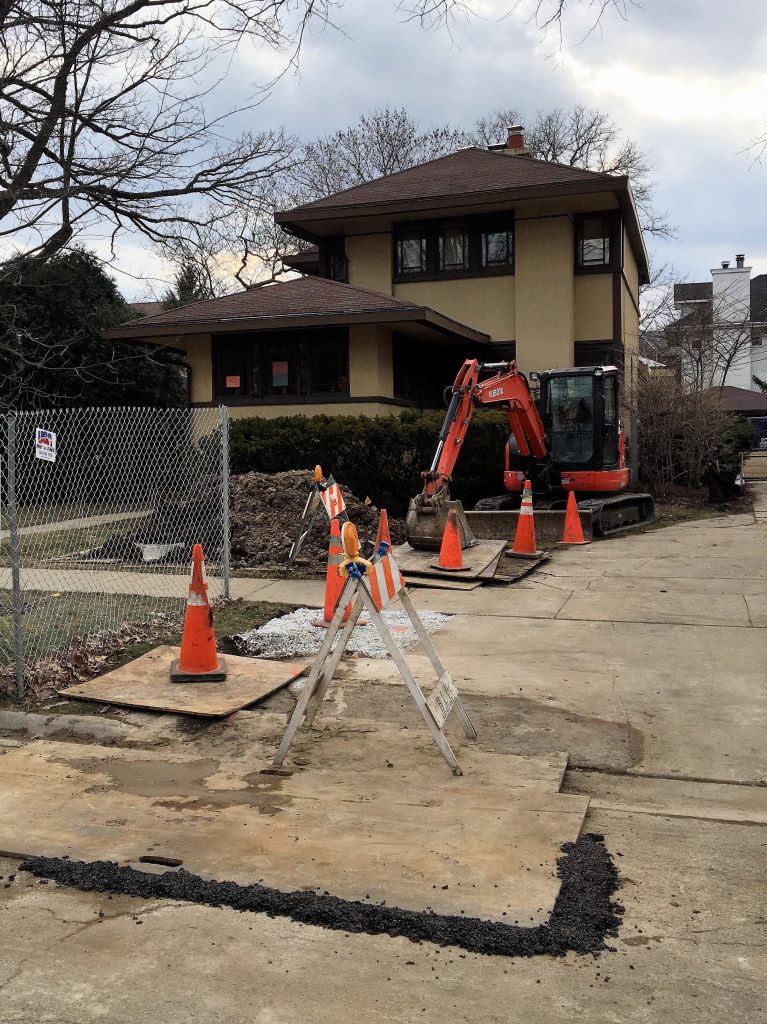 The village wanted the electric meter pedestal installed near the front of the house. The electrician came out and installed the pedestal where they were told. It practically blocked our existing water spigot. Worse, it cost us an extra $2,500 in electrical work. Had I simply told everyone to stop, I could have asked the village to install the meter in a better, less visible spot, which would have been closer to the electrical boxes, and would have required less work and money to run the new service from one end of our house to the other.

Seldom does the better solution cost you less, but that would have been the case here. (I only narrowly avoided having the village install the transformer in the middle of our front yard, so at least that detail didn’t escape me!)

I was very happy with the plumber we hired for the upgrade, but several details were missed.

First, they began digging in the wrong location, and they removed a chunk of our driveway unnecessarily. I’m not sure how this could have happened. It seems like there were people out locating services every day for the past couple weeks. And, I showed them exactly where to dig. At least they didn’t hit anything and the village corrected them.

Then, they put the new water line in a pretty prominent location in the basement, sticking way out from the foundation. I had wanted it tucked away and in a corner in case we want to finish that room in the future as a rec room. They told me they ran into the footings. I told them our house has no footings and that that was impossible. The plumber shrugged and they installed it anyway. (In fairness, the 1 1/2″ copper pipe they had to work with was pretty unwieldy.)

Then, I looked outside. A new B box was installed at an angle. The edge sticks out pretty severely and is destined to ruin many a lawnmower blade. The plumber is going to dig it back up and fix this. It is at least 6″ off. A simple level should be used by anyone doing any such work. This is just downright sloppy.

When you upgrade your water service, the village gives the plumber a piece of pipe that they can install as a temporary placeholder for the water meter. Then, the village comes by, removes this pipe, and sticks the meter in.

It turns out our village gave the plumber the wrong pipe. I guess they have a lot of different pieces of pipe laying around and picked one that was just too short. When the village came out this afternoon to install the meter, there wasn’t enough of a gap between our brand new plumbing and the water line coming in through the floor. I was really happy that our plumber could come out only an hour later to cut an inch of pipe out and install the meter successfully.

The inside plumbing is another story. Evidently you must install the upgraded water line all the way to the hot water heater. I knew about this from talking to our contractor about it last summer. At the time, they told me they would be handling all of the inside plumbing. So, I only hired the plumber to do the outside work, only to find out that this key detail was left out of our contract, and that now I’m on the hook to pay another $1,860 for the inside plumbing as well. Plus moving the water spigot that was blocked by the pedestal. That’s another $50.

The water pressure is now amazing. Part of this is due to the upgrade to 1 1/2″. Part of this is the installation of 25′ of new copper inside the house, which allowed us to remove a lot of crummy old galvanized steel pipe. Over time, sediment builds up inside galvanized, reducing water flow. By the time this renovation is complete, all of the galvanized in the house will be replaced (aside from our radiator system).

The basement carpentry is now underway. Once complete, this will allow plumbing and electrical work to proceed. However, two more mistakes were made.

First, the escape window was incorrectly measured. The architectural plans noted two different dimensions for the distance it should be placed from the rear wall. The concrete contractor picked the wrong one: they must have used the elevation rather than the foundation plan. When the carpenters went to install a wall in the basement, it wound up smack in the middle of the window. The concrete contractor will return to cut and repair the opening by moving it over by 8″ or so. (Here’s a good picture of the escape window in the foundation.)

Next, the laundry room’s pocket door installation nearly happened. This was a change that we made from the plans after they were finalized, so I can understand how this happened. We decided that barn doors would look better than regular doors, so we nixed the pocket doors at the last minute. We told the contractor about this, but the drawings weren’t updated. The contractor already ordered the pocket door frames, but they haven’t been installed yet, and can be returned.

Sorting out the roof and gutters continues to be a challenge. The roofer came back out this week and met with me to discuss how to address the lack of sheathing and lack of pitch. It sounds like our main contractor wants the roofing company to address the sheathing and figure out how to pitch the gutters properly. This means the already expensive roofing project will get even more expensive. The good news is that the contractor will give us a credit for the roof and gutters they won’t be installing.

I’ve also realized that the contractor measured the addition’s roof to match the top of new roof to the top of the shingles of the existing roof. This measurement didn’t account for the four layers of shingles we plan to tear off of the existing roof. So now we’ll need to have our roofer build up the section of the roof that the addition ties into with additional plywood so that they match seamlessly.

While we sort out the roof and gutters, our roofer came out today to install some underlayment to protect the roof and addition from rain.

The electrician who installed the underground electrical conduit to the garage mistakenly installed it into what will be a basement window (and is currently boarded over), thinking it was the back wall of the house. That will need to be moved.

The good news: a lot of progress has been made, and it’s exciting to see the basement rooms start to take shape!